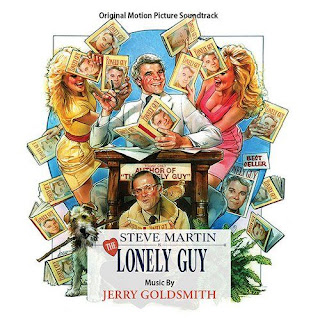 My sleep patterns change like the seasons and basically resemble an etch a sketch. Falling asleep is never a problem. I can and have done that on my feet, up against a wall while waiting for a train. Staying asleep... that's the tricky part. So when I woke this morning the only thing that stopped me from making coffee was first glancing at the clock to see that it was actually only 2 am. I had fallen asleep hours earlier while watching a movie, so the tv was still on and so as I buried myself back under the covers I heard Steve Martin's voice mumble something from across the room. I laid there for a few minutes listening before finally realizing that the film was The Lonely Guy, filmed in NYC during the summer of 1983.

In June of 1983 I was wrapping up my first year of middle school and the 6th-grade class trip was to NYC. I still can't believe they had that kind of budget but they were taking about 400 kids to see a show at Radio City Music Hall. It was called 5678 Dance! with Sandy Duncan and it was a tribute to the swing era of music so I was thrilled. My first time seeing anything near Broadway and my first time in the city without a parent so it was a double win for me.

My mother was worried about me going without her and did her best to convince me that someone was going to try and kidnap me, so here was a list of things to do when it happened. She was, in her mind, being preemptive I guess and I was positive nothing was going to happen to me. Kinda. Okay, so I was about 75% positive.

When we first arrived in the city they decided to take us to Central Park for an early lunch. I mean where else are you going to stash 400 kids on a weekday, right? The teachers handed us premade brown bag lunches as we exited the bus with our group. Each group had about 15 kids, a teacher, a parent chaperone and I was happy to be with a few friends and the gym teacher I loved so it was going to be a great day. I remember our group breaking away from the massive amount of people we were with and going down a path to a different area of the park.

We sat down in the grass to eat and there was a crowd of people maybe 100 feet away from us. No one knew what was going on but there was a film crew so after we finished our lunch our teacher suggested we go and check it out. The crowd was still there and we got as close as maybe 20 feet away before the chaperone caught the first glimpse and half yelled to us,

I couldn't see him. I'm not sure if I had a decent vantage point but even if I had I was still way shorter than the wall of adults in front of me. I had my little Instamatic camera with me and wanted to get a picture of Steve for my dad, who just loved him. By 1983 I was watching old Saturday Night Live reruns every night at 7pm with dad so Steve, Chevy, Gilda, Jane, Bill Murray, Belushi... were like friends of the family.

Anyway, I THINK that I wanted an adult (that could see) to take a picture for me and I THINK that my teacher was trying to pass my camera to someone up closer. I just remember a guy in red and white striped jogging shorts taking my camera and walking behind me. I thought he was just moving to a better angle but no, the next thing I knew I was airborne. He had picked me up under my armpits and started to carry me. I had no idea what was happening but I was pretty sure I was being kidnapped.

Like this was really happening and my mother probably manifested it from hours away. I think I was in a solid panic when he dropped me right at the front of the taped-off area. I looked up and I was about 8 feet from Steve, sitting in his director's chair next to a guy in a sweater vest and both of them were staring at me. I took my picture and got out of there fast and rejoined our group.

My friends were laughing and asked me why I kicked the guy who carried me. I don't remember doing that at all but to defend it, I had no idea who picked me up and didn't see him until he dropped me on the ground so... sorry. My mom told me to do it.

So many decades later, that pic still lives in a little gold frame on a high shelf above dad's stereo equipment and music collection.