Once Upon a Time. 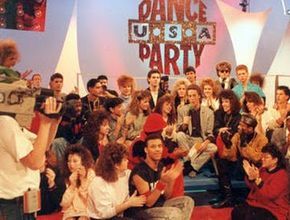 If you grew up in the mid to late ‘80s and lived in the New York, New Jersey, Pennsylvania tri-state area, then the name Dance Party USA will likely bring a smile to your face. Every time I mention it to someone from the northeast, they inevitably say that that they loved the show. Determined to be a trendier version of American Bandstand, Dance Party USA ran on the USA network for six years and introduced all of America to a bunch of Philadelphia and New Jersey-based kids who loved to dance.

The show originally aired under the name Dancin' On Air on a local Philadelphia channel years earlier, so by the time it was in syndication, I was already hooked and watched it religiously after school. They weren’t exactly reinventing the wheel, teenagers dancing in front of cameras, for whatever reason, has always been a thing that works. Dance Party USA put their own personal stamp on it by choosing dance music that was popular in bigger cities, and it was where I got my education in freestyle, house, and club music. They had guests come in to perform and the “regulars” got to perform lip-syncs to their favorite songs as well. If you watched the show, it was because you really wanted to be on it.

It looked like a blast from the outside. Cool kids smiling and laughing, everyone dressed really cool and rubbing elbows with celebrities! Plus, they made it personal. You could write the regular dancer's letters, and not only did they receive them, but based on the little shoebox full of responses that I had saved, they would actually respond! They always posted the address to write for free tickets to the show, and eventually, I wrote in just to have a few tickets for myself. I was way too young to go, but I really wanted those tickets to save in my box of letters.

It’s so strange how that aging thing works. One day you’re too young to do something, and then, with the flip of a calendar, BOOM, you’re now of age. Years of watching other kids dance on television eventually led to one of those calendar flips, and just like that, if I wanted to join them, I could. Or I could at least try and thank God I had a few friends that wanted to try too! I requested new tickets, and within about two weeks, a pair that was good for any taping arrived.

The show taped each Saturday in a Philly television studio, and the set itself was about the same size as the downstairs of my house. It was my very first glimpse at the magic of television and how things always appear much different through a lens than they are in real life. Stepping onto the set for the first time was surreal because it was just this empty floor, a few carpeted platforms and the big Dance Party USA banner hanging in the back behind everything. It was exactly what you see on the show but the camera work somehow eliminated how packed in like sardines we actually were.  There were three different kinds of dancers, regulars, regular repeat guests (if you came back a few times), and just guests. My friends and I returned a few times before the show finally wrapped production in the early ‘90s, but I never really thought of myself as a repeat guest.

I was a rock chick by day, deeply rooted in my Whitesnake, Winger, and Def Leppard. But on Saturday, my big teased hair was bopping around to The Cover Girls, TKA, and other Bronx-born Latin freestyle artists. I literally had to leave the suburbs and drive to a major city to hear this stuff, and I had an absolute blast doing it. I paired my shredded jeans with ruffled white shirts and polka dots, cracked out the black bustier with a see-through black top over it à la Madonna, and fully embraced the club vibe. It was a break from the seriousness of life, and that, that was something that I desperately needed.

Mom would have killed me if she had known, but the chance of her watching even five minutes of Dance Party USA was less than zero. She was always under the impression that I was taking a bus to go to work (which sometimes really did happen), and then after that, she thought I was circling the mall with the one friend of mine she really liked. We usually did end up at the mall, but it was after a few hours of dancing, which was a lot more fun than dumping fish fillets on Styrofoam plates.

I remember watching the show and fantasizing about being a regular—about how they were like best friends with the artists that performed and probably treated like superstars. That was nowhere near reality. The musical acts that were booked to perform were the actual stars. Girl groups like The Cover Girls and Sweet Sensation, or boy bands on the rise like Linear and TKA, they were the superstars. We danced around them while they lip-synched to songs that were actually on the radio, and if we were lucky, we might have the chance to say “hi.” I first met Betty Dee of Sweet Sensation on that sound stage, and it made my month because she was a real girl following her real dream.

Dance Party USA dancers were crammed into a small space, fed cupcakes for meals, and were expected to be “on” the second the cameras rolled demanded it. Put a bunch of teens and young adults together like that, and you get fights and emotional meltdowns. You also get jealousy and mini-heartbreaks on a regular basis, but those are the things that the music seemed to put a Band-Aid on, if not fully heal. Once it started to play, everyone ended up lost in the beats, and the only battles left to be fought were in a circle on that dancefloor.