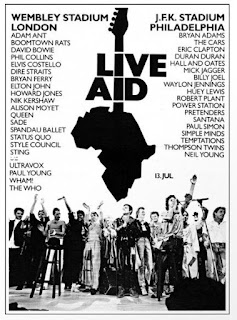 I  know exactly where I was on the second weekend in July back in 1985, and it was not in JFK Stadium in Philadelphia for Live Aid. I mean, a lot of other fourteen-year-olds weren’t in attendance either, right? But I was in the freaking parking lot of JFK on July 13th, 1985, and that’s what makes this all pretty ironic for me. My mom’s church would have these huge meetups a few times a year, and for reasons that never made sense to me, having tens of thousands of people gather in Veteran’s Stadium in the July Philly heat seemed like a good idea to them. So… there we were at Live Aid. Almost.

As a kid, I was just as music-obsessed as I am now, and so the buildup for Live Aid made it a larger-than-life event for me. I’d cut out every tidbit in the newspaper. I can remember having my dad bring home Philly newspapers so that I could save all of the promo and interviews that they were doing to ensure that 100,000 fans would show up.

We were actually in the city from Thursday through Sunday, with Live Aid, of course, happening that Saturday. Our hotel near the airport was filled with concertgoers, and I remember finding excuses to stay in the lobby so I could eavesdrop on any conversation pertaining to Madonna, Duran Duran, and whoever else these complete strangers were excited about seeing.

Right before Live Aid, Madonna’s naked photos had been sold to Hustler and published. That meant more coverage for her, so I smuggled every newspaper article about her scandalous behavior back home with me too. That was a real task because Madonna was not allowed in our house. Not with those crucifixes and blasphemous outfits. But I absolutely loved her. Mom didn’t realize how many of my fashion choices, like the big bows, jelly bracelets, and lace gloves, were inspired by her. Madonna couldn’t be out in the open in my house, but she was plastered all over the inside of my locker all through middle school.

The morning of the event itself, I can remember being stuck in traffic literally forever, which was fine with me. I didn’t want to die for hours in the heat, even if it was “God’s will” (or something). I wanted to instead die in that same heat while wearing a bow in my teased-out hair, lace gloves, and a few crop tops layered to complete the visual coolness. Sitting in traffic was a comfort because I was surrounded by my people, at least until we turned towards the Vet. I sat in my seat, hoping that by the time we got out, I’d be able to hear something, anything from the parking lot. Philly venues have always been close enough for that to be a reality.

Leaving the parking lot to go back to our hotel will probably forever remain my very favorite traffic jam because Dad’s big old Buick Skylark didn’t have A/C, so the windows had to be rolled down. Off in the not-too-far distance, I could hear Ashford & Simpson’s “Solid,” which eventually turned into a set by Kool & the Gang. Who followed them? The Material Girl herself, with extended versions of “Holiday” and “Into the Groove.” Honestly, I don’t think I heard all of that second song by Madonna, but I did hear enough to feel like I was part of some sort of musical magic. I couldn’t imagine ever getting to go to a real concert. My best friend Carrie had gotten to see the Jacksons’ Victory Tour the summer before and had told me all the details, so I could almost imagine what it was like, but it wasn’t real enough. This at least felt real because I could hear it myself.

When I reflect back on this event, it’s a bit of a Twilight Zone experience to me. My dad and I never discussed it, but it must have killed him to be in his thirties and so close to all those artists but unable to attend! I can’t even imagine how cruel that must have felt to him, because I’m sure whatever I felt was only a fraction of his reaction. Mom’s church was an environment of programmed, do-as-you’re-told type thinking, and so they did for fear of the ramifications of doing anything else. But it must have killed him!

Maybe it explains why concerts are my happy place. Maybe being left out of something so big and so close planted the seeds for me to make sure that once I was old enough, it wouldn’t happen again. A concert with the magnitude of Live Aid hasn’t happened in years, if not decades, but you better believe that the next time one appears on the horizon, I’ll be there. Not just in the parking lot either, but through the gates and somewhere near the stage.