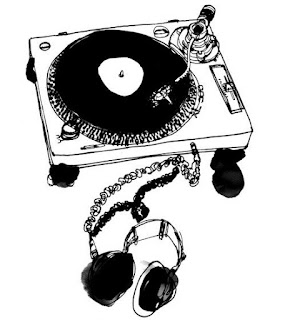 My dad had the most enviable record collection but of course, there was conflict along the way. My mom didn't exactly love his hobby and she blatantly disapproved of a lot of the artists that he brought in the front door. He got away with a lot but it was fairly well known that dad was expected to keep a close eye on what 45's I wanted. The only problem there was that because music is such a subjective thing he just wasn't inclined to tell me no, thankfully.

Dad suffered through several spins of "Disco Duck" before being happy to watch me move on to ABBA. He might have been a classic rock kind of guy but he had no problem suffering for the greater good and encouraging my love of disco, at least until I discovered Pat Benetar. I asked who she was and he bought me Crimes of Passion the next day. Anything to make sure that disco was finally dead in our house.
I still can remember this one Saturday afternoon when he and I drove to a record store in a strip mall next to a Kmart (back when the blue light special was alive and well). There were several record stores that we would frequent and if you told me that they wouldn't exist a few decades later I would never have believed it. Anyway, the Saturday afternoon deal was always that I could get a 45 or 2 if it was a really good week. I looked and looked, knowing exactly what I wanted, Rod Stewart's "Passion". It was probably 1980 and not exactly appropriate for a 9-year-old. Dad actually said no, probably because he envisioned my mom's reaction if he bought it for me.
The next weekend I had a plan. I had 179 pennies in a sandwich bag because if it was my money he probably wouldn't stop me. I was always thinking a few steps ahead and a bit on the enterprising side. I walked up to the counter with "Passion" in one hand and the pennies in the other. The shop owner made me count them out and then he scooped them up and dumped them into his register drawer. The look on his face meant that dad secretly liked how nervy I was, but warned me that my mom would be pissed & he would likely get blasted too.
I don't remember her words exactly but I do remember him defending me and saying I probably just loved the music (true story it was all about the keys) and he wasn't going to stop me if I had the nerve to bust my piggy bank for it. Needless to say, "Passion" got thrown in the garbage but about a week later my dad bought it and magically gave it to me after he was done with it. For years afterward my dad would buy 45's, put them on tape & I'd inherit the vinyl. It killed 2 birds with one stone. He could hide "debasing" cover art from mom (so sad), retain the music, and then put the vinyl in a plain sleeve so that I could keep it too.
Forty years later and I still have that well-played single in a frame in my office. An early victory of sorts worth hanging on to.
at September 27, 2021