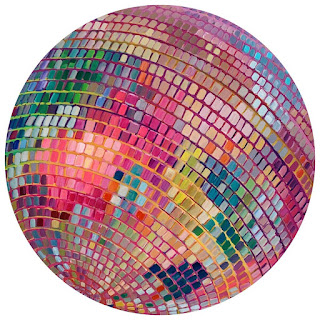 A few lines into the old disco classic “Shame” and I’m standing in my parents’ very first apartment where my love of music all began. A few days before Halloween, my parents threw a party for all of their friends. The night before had been my kiddie party in our basement. I wore a Wonder Woman costume that was so NOT a Wonder Woman costume because it had a skirt and no lasso or boots. I remember a punch bowl and bobbing for apples, and little else. But my parents’ party, well that was the real deal. There was neat lighting, a table full of sweets that I was never allowed to have, and all our doorways were hung with beads that you were supposed to walk through.

I was seven years old and beginning to develop my own taste, and thanks to my dad’s music obsession, disco was a big part of it. When I was about five, he started to train as a DJ at a local radio station, and his little record collection on a tiny cart with wheels suddenly took over a whole wall of our living room. Even in that small apartment, Dad’s stereo was front and center. His love of music turned into an educated love of stereo equipment. He spent two hours every night, without fail, cranking out tunes, everything from Pink Floyd to Blue Oyster Cult to ABBA. And all the while, he was fiddling with levers on all sorts of boxes that were supposed to somehow enhance the sound. I didn’t know if the “woofers and tweeters” did any good, but the day he played Chic’s “Le Freak,” my little life changed.

I picked out the last song of every evening, and by the time 1978 rolled around, I was choosing things like “Ring My Bell,” “The Hustle,” and “Disco Inferno.” I also waited anxiously for Saturday afternoons to roll around, because thanks to cable television and WPIX in NYC, I had discovered The Soap Factory, a weekly dance show. A few weeks before my parent's party, we were all watching as Evelyn “Champagne” King performed a song called “Shame.” My dad always watched The Soap Factory with me, but this time, even my mom stopped to check out the television. She was a huge Debbie Harry fan at the time, and once she found a musical groove, she stayed in it for a while, so this Evelyn chick had to be good to grab my mom’s attention.

My mom spent the next week or so in party-planning mode. She would fill the bathroom sink with water and bubbles, and I’d spend an hour in there playing with all of my Fisher-Price Little People. I loved having them swim and ride in their boats every night after dinner, and I can remember my mom on the phone in the next room, night after night, making plans for this bash. My dad was always the laid-back one and seemed to have little involvement. Mom hung sparkly decorations, made food, and spiked the punch, all while dad was engrossed in his albums. Neither of us realized what he was actually up to. As it turned out, Dad’s involvement was monumental, because he was preparing to put all of those newfound DJ skills into action.

My mom had a surprise or two up her sleeve as well. The creativity was always flowing in that little apartment, and so for the week leading up to the party, while Dad and his music were taking over the living room, Mom was in her studio. It was a small room with her easel and mountain of art supplies on one side and her Singer sewing machine on the other. Beneath a window was a big cushion with built-in pillows to nap on. That was my spot to read or draw while Mom was busy drawing up advertisements for our local newspaper. Dad had thought Mom was working on extra assignments for art school, when in fact she had been busy at her sewing machine making a turquoise satin pants suit, just like Debbie Harry’s. She had decided to put her blonde wavy hair and 100 pound frame to good use and transform into his new favorite singer, gold cuff bracelet and all, for their Halloween party.

Thinking of that night reminds me that at one point in time, my parents really, truly were on the same page. They really did “get” each other. Dad was just getting the party started, directing friends to food and the big punch bowl when mom walked through the beaded doorway and into the living room. Mom was in her early twenties, an art student with a free spirit to match, and always beautiful, but this night was different. Dad stopped and stared for a moment at her disco transformation, happy absolutely blown away to see her step out of her normal boho comfort zone.

My dad was the man, but his music collection was the true star of the evening. His friends were all on the floor in front of his racks of records, flipping through everything in amazement and helping him to decide what to play next. Dad’s dedications were also a hit, because not only were the songs that he played for particular people, but he also had hilarious reasons for his selections.

An hour or so into the party, Dad pulled out a surprise record that he was really excited about. It was Blondie’s “Heart of Glass,” an extended dance mix that wasn’t available in the States yet. When he ordered music for the station, he would also add a few import records from the UK for his own collection, and Blondie had just become available. No one else knew the song until he played it that night, but everyone loved it. Even the guys that had been downing their Michelob beer on the floor in front of the stereo all night were finally dancing. One spin of that record led to about twenty more before the night was over. My dad was never one to leave me out, so every spin of Blondie was chased by my new favorite extended dance mix of “Shame.”

I might have been the only one not in costume at the beginning of the night, and that was because there was no way I was going to put that fake Wonder Woman thing on again. My aunt (Mom’s younger sister) decided in the middle of what looked like a Soul Train line dance that I needed some makeup, at least. She grabbed me and her purse and hauled us both into the bathroom. There, Aunt Elaine pulled out her black eyeliner and, within a few minutes, transformed me into “Cleopatra.” I wasn’t sure exactly who that was, but my eyes looked like I belonged on The Soap Factory, so that kind of made me a disco queen for the night too, right?

Everyone left after midnight. I remember my dad explaining the concept of time to me and how the digital clock turning to 12:01 a.m. meant that it was Sunday morning, even though it still felt like Saturday night. Truth be told, it was far later than that, and somehow I was still awake. My mom tried to make me go to bed, but when I begged for one more spin of “Shame,” my dad put the record on before she could even protest. My room needed to be cleaned up anyway, as my bed was where everyone had left their belongings upon arrival. They and their coats were gone, but my toys were still all over the place, and my precious Little People were scattered across the room. I swore that I would help clean up if they let me stay up, but instead, I climbed into the green recliner that had been temporarily moved into my room during the party. The French doors to my room stayed open, and I curled up there, watching as my parents dragged garbage bags around to clean up the wreckage. My mom told me that I had five minutes until she was putting me to bed, so I closed my eyes as the private kitchen disco played on.

Who knew nights like this one actually existed? If beaded doorways, little packs of M&M’s, and unexpected dance battles were what it meant to be an adult, then I really couldn’t wait to grow up. I closed my eyes tighter as I heard mom approaching, and when she whispered to dad that I was asleep, I stayed extra still until she went back to cleaning up. Eventually, I really did drift off in that chair and woke later as dad was carrying me across the room to my bed. As mom tucked me in and kissed me goodnight, she did the only thing that could have made this night any better: she took off her shiny cuff bracelet and put it on my arm.