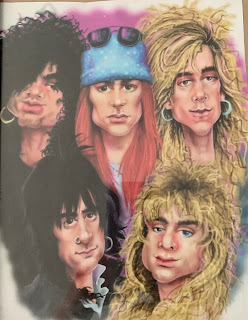 I live in an area that has a bunch of antique shops right on the main street smack in the middle of town. Vinyl records were a pretty big deal here, and I’m thrilled. I’ve scoured my parents’ attic for my old record player and records with no luck (even though I’m sure they are there), so I decided to start collecting all over again. My mission has been to replace what I had as a kid, and along the way, I got a little obsessed. That obsession with old vinyl has rubbed off on my kids, and they can also be found on the floor flipping through albums hoping to find a treasure. Occasionally, I’ll order something online, but nothing beats actually finding what I’m looking for in an old stack of albums.

Vixen’s self-titled album was one of those that I had to order because in the last ten months, I have only come across one copy and it was fifty bucks. The nostalgia part said to pull the trigger and buy it, while the logical part of my brain reminded me that I could get it for twenty dollars on eBay, so the internet won. I was in 11th grade when the all-female band first burst onto the scene with “Edge of a Broken Heart” and, like everyone else, I bought their album on cassette pretty quickly, then carried it everywhere with me in my Walkman. While it was obviously the cool thing to be listening to, my reason for carrying it around with me was actually two-fold.

My mother was extremely religious, and by the time I was in high school, she made a regular habit out of invading my room while I was at school or work and throwing out anything that she didn’t approve of. Music was a huge bone of contention in our house, and she was known to throw out albums if she didn’t like the look of a cover. Needless to say, women clad in leather and draped in crucifixes were never, ever going to make the cut. I would buy a particular cassette with my own money from working at a fast-food restaurant, and she would throw it out within hours. If I forgot it, it was gone when I got home. I would have thought it was a game, except that mom seriously thought that demons would infiltrate our home via a “debasing” record. I know that I replaced Vixen at least five times in an eighteen-month period.

I finally learned to get rid of the tape cases and would just carry the cassettes with me at the bottom of my bag. During this time, I was working until closing just about every night and loved it because of the people I was working with. My friend Nick was the fry cook that I usually closed with, and I loved him. No really, I loved him. We were thick as thieves and had just about everything in common. He and I had the same sense of humor, and I found out the first night closing that once the doors were locked, the boom box was cranked all the way up. Nick sang for a local band and did a damn good impersonation of just about every lead singer that was popping up on MTV every hour. He would grab the mic that we used to call backorders (no headsets back then) and sing entire songs into it.

Way back in 1988, if there was nothing to do, then you would spend your Friday and Saturday nights walking in circles at the mall. Well, actually we would congregate until the rent-a-cop came and told us to “move along.” Then our huge group would move in slow motion to the opposite end of the mall. I had friends from several different schools, and the mall was where everyone met up. The bathrooms were just a big cloud of hairspray that hung permanently in the air because everyone in front of the mirrors was spraying something to make sure the wall on top of their head wouldn’t budge even an inch.

There was also a club that had gigs one night a week for an all-ages crowd. If we were really lucky and could find a ride, we would leave the mall, go to the club, and then be back in time for the mass mall-parking-lot-pick-up without the parents ever knowing. Nick was singing with a band, and he really was pretty great, so I went every time I had a chance. Probably with my cassettes safely at the bottom of my purse.

Eventually, this club started hosting real rock acts. Bands like Warrant, Winger, and Cinderella got their start by playing in either small clubs or local skating rinks. If you were on the east coast especially, you saw a lot of these bands breeze through before they would embark on full arena tours. Word spread quickly that a popular band called White Lion was rolling into town, and they were going to bring Vixen with them. I was so excited, and so was Nick. He was also in high school, one across the city from me, and he had spent quite a while debating whether or not to sign up for his school’s talent show. I mean he flip-flopped for months, to the point that it became annoying. He realized that this concert was happening a few days before the talent show, and he had already been kicking around the idea of doing a White Lion song, so he decided to watch the real deal and then do the school show. His concern was that he had to put together a band of classmates, and he worried about pulling that off. Eventually, he and three guys started playing together and realized that they could actually do an amazing version of “Wait,” so they signed up.

Naturally, Nick and I went to see White Lion and Vixen together. He studied the former’s lackluster performance, and I was mesmerized by the latter. Girl power. Unity. Integrity. Vixen rocked as hard as the guys but also had the emotional bond that teenage girls especially hope to find. I left completely inspired that night, with a little piece of my insecure self truly believing that maybe one day I could be as strong as those women were.

Nick and the guys were so excited about the talent show because, as they saw it, this was their chance, this was their thing. The jocks had football and the diehard academics had a chance every single school day to prove that they were good at something. This one was for the creative kids, the art nerds, and musicians-in-training that really did have something to prove. It was their chance to show up and make sure everyone in attendance knew that they could be the best at something. It was huge, really huge. Every kid that classified themselves as a “headbanger” citywide was looking forward to this show because once the word spread, well, Nick was kind of representing us all.

The night of the show finally rolled around, and I remember having to walk there with my friend. We walked from the other side of the city and got there pretty early.  Honestly, I can’t remember any details from the early part of the night, or any performance before Nick’s. It’s all a blur because I was so excited. I remember that the feeling in the auditorium was electric. It was that excitement you feel when you know someone is about to show up and totally kill it. That excitement mixed in with a calm knowing that they absolutely had this.

Nick and his friends did indeed kill it. The whole place was on their feet, and for about four-and-a-half minutes, no one could deny just how talented this crew was. The teachers looked thrilled; I think everyone got what a big victory for the underdog this was. There was one act left, a group of jocks that were going to sing something, and no one thought much of it. They played football, basketball, whatever, and weren’t known for being the least bit musical, so it felt like their performance was more obligatory than anything else.

They called themselves Mosquito Coast (I probably remember it because it still makes no sense to me), and when they took the stage, Nick was already sitting on the floor in front of our row of seats, waiting for them to bomb. But fail they didn’t. Instead, these guys pulled out a six-minute rendition of Pink Floyd’s “Comfortably Numb” that was absolutely gorgeous. Like, it was so good that I couldn’t even try to say they sucked in an attempt to make Nick feel better, because they were amazing, and everyone knew it. By the end of the chorus, our whole section was crying; we knew that it was all over. The jocks had won this round of high school life too, and it was fair and square. It came down to a matter of preference, and if the harmony didn’t do it, then the solo guitar riff sure sealed it.

I don’t think any of us entertained the idea of Nick losing until he actually did. I think I was heartbroken for him for days. He skipped a few nights of work and didn’t return phone calls at all. I was contemplating going to his house to check on him, but being sixteen and lightyears away from being the ballsy chick that I eventually grew up to be, I squashed that idea completely. Nick eventually did come back to work, and he grabbed the mic at the register once the doors were locked. This time, instead of singing a popular hairband song, he belted out a stunning, sedate verse from “Comfortably Numb.” Eventually, that song (guitar riff and all) was worked into his band’s regular setlist. What felt like a defeat ended up motivating Nick toward some major musical growth. Just like what I thought was just another random night in a club ended up being my first real taste of enviable female empowerment.

Every time I crack out White Lion, I think of Nick, without fail. He was my own personal rock star for a few years, and I have nothing but great memories of him because even the tough moments eventually turned into something positive and precious. As for my new-old Vixen album—while this might be the seventh or eighth time I've actually bought it, it’s likely to be the last.